Myopia, or more commonly known as nearsightedness, occurs when the cornea is steeper than a normal cornea or the length of the eyeball is longer than a normal eyeball when measured from front to back. This causes incoming light to focus in front of the retina. People with Myopia have difficulty seeing objects at a distance, but they are usually able to see objects at near.

Hyperopia, or more commonly known as farsightedness occurs when the cornea is flatter than a normal cornea or the length of the eyeball is shorter then a normal eyeball when measured from front to back. This causes incoming light to focus behind the retina rather then on it. Usually people with hyperopia have trouble focusing on objects up close such as reading a book or using a computer, but sometimes they may also have difficulty with distance tasks.

Astigmatism occurs when the shape of the eye is not round like a spherical ball but is commonly described as being shaped like a “football”. This occurs because there are two different curvatures of the cornea, one being steeper then the other. This causes light to focus on different parts of the eye. People with astigmatism usually have difficulty focusing on objects at both distance and near.

Presbyopia or more commonly known as, “my arms are too short” syndrome typically occurs around the age of 40. As we age, the lenses in our eyes thicken and harden over time and we gradually lose the ability to focus on objects at near. This becomes worse each year as we age but typically stabilizes out around the age of 65-70. 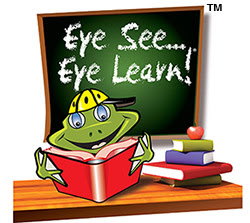 Free Glasses for Kids? Click on Fribbit® to learn more!